The Story of Synko-Filipko and other Russian Folk Tales

This is the second book of Russian folk tales published by Fontanka, following Why the Bear has no Tail and other Russian Folk Tales. Here, too, the illustrations are by the Russian artist Elena Polenova (1850–98; younger sister of artist Vasily Polenov). Polenova believed that Russian children needed beautifully illustrated folk tales akin to those published in Germany and England, and she assembled her own versions from various published and unpublished sources. Her illustrations drew inspiration from expeditions to Russian villages to discover local art traditions. 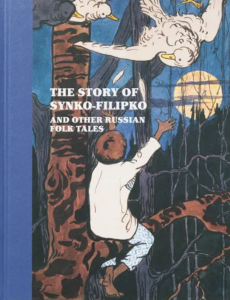 Why the Bear has no Tail and other Russian Folk Tales

Towards the end of the 19th century, the English art journalist Netta Peacock travelled to Russia where she met Elena Polenova, the artist and younger sister of the famous artist Vasily Polenov. Polenova collected the traditional folk tales she heard from peasants in local villages, and also illustrated them. Peacock asked if she could translate the tales and publish them in England. Polenova gave her twelve watercolour paintings, as well as a cover design painted on an exercise book but the book was never published – probably as a result of the First World War. Nearly a hundred years later, the original illustrations and stories were rediscovered in the Oxfordshire home of Netta Peacock’s descendants by Dr Louise Hardiman. Now they have finally been published in a beautifully designed children’s book supported by Natalya Polenova, the great-granddaughter of Elena, who is custodian of the Polenovo State Museum Reserve in Russia. 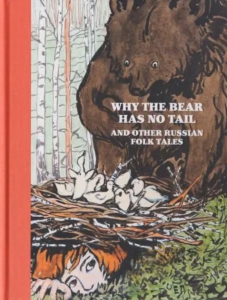